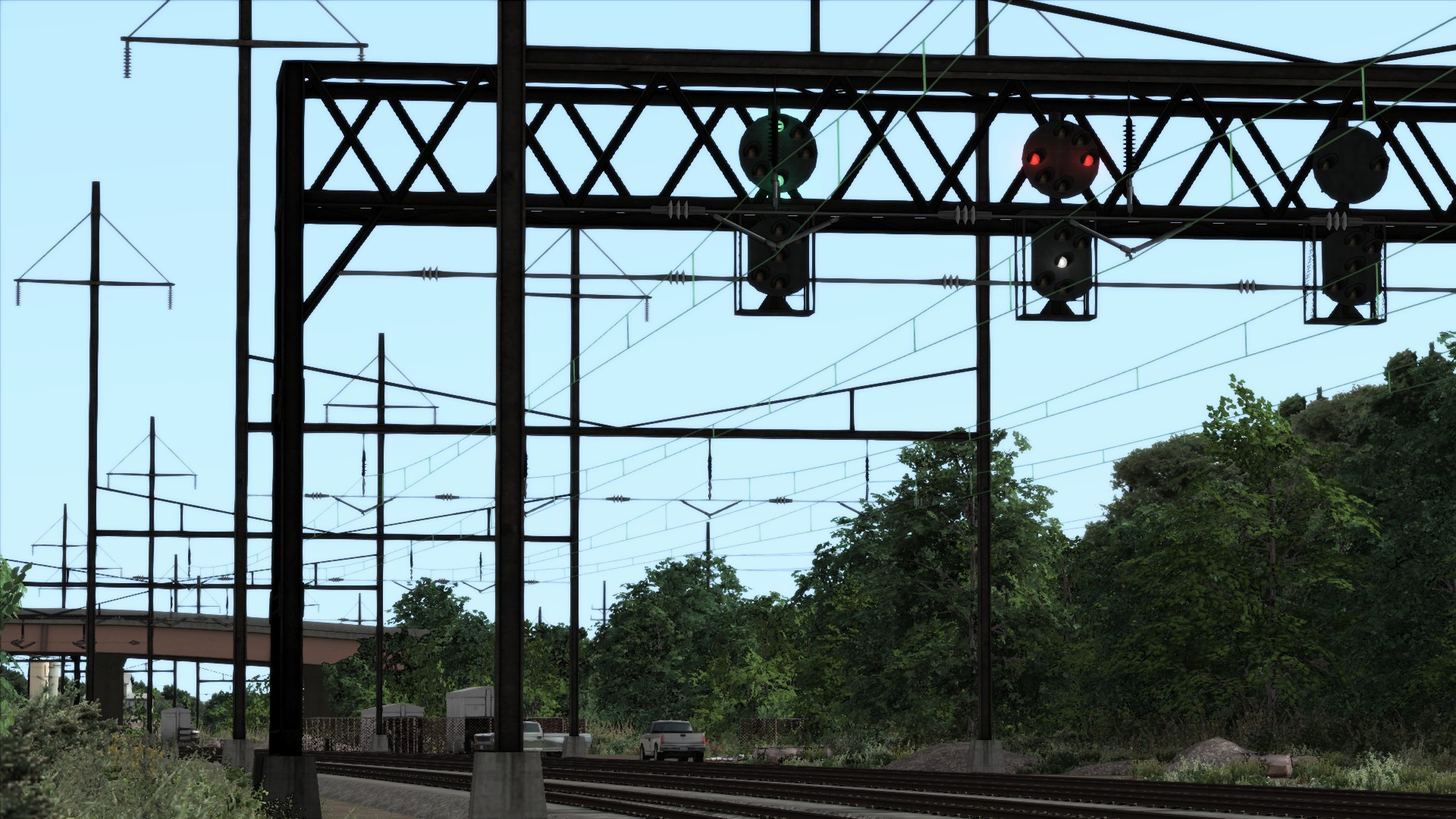 As the fastest and busiest rail corridor in the Americas, with trains screaming at speeds up to 150 mph, the Northeast Corridor relies heavily on cab signaling and onboard safety systems to keep an intricate mix of freight, Amtrak, and commuter trains below safe operating speeds. Computers constantly read the current speed, the positions of the controls, the status of the occupying signal block, and the locations of upcoming speed restrictions to determine the maximum safe speed for a given train. If the train's engineer violates that speed, or fails to respond to a change in driving conditions, then the system penalizes them—first with an alarm, and then, eventually, a full application of the service brakes.

Simply put, if your locomotive isn't beeping at you, sounding alarms, or even occasionally stopping itself on you, then you're not really driving a train on the Northeast Corridor. Unfortunately, when it comes to incorporating these essential and engaging systems into the gameplay of Train Simulator, Dovetail Games has a rather mediocre track record. While their 3D models include the correct displays, the logic that drives the systems themselves—the indicators they present, the sounds they make, the enforcement actions they take—has been consistently incomplete and inaccurate across every Northeast Corridor DLC released.

To be more specific, Dovetail has only partially modeled the corridor's Automatic Train Control (ATC) system, which is responsible for enforcing the maximum signal block speed. With respect to realism, Dovetail's ATC implementation is actually passable, but it often bugs out, leaving the train stuck with cab signals that freeze or brakes that won't release until the player turns ATC off and on again. And because every DLC release is developed and tested separately, every locomotive behaves ever so differently; indeed, the ATC for a given locomotive often doesn't function on other Northeast Corridor segments it wasn't tested on, even though in reality, the entire corridor uses the same set of cab signaling codes. Meanwhile, the Advanced Civil Speed Enforcement System (ACSES), which is responsible for enforcing the permanent track speed, is entirely absent, or only uselessly shows the same speed limit as the game's HUD does.

That's a harsh assessment, but fortunately, things don't have to be this way. By swapping the Lua code in each locomotive for open-source replacements, we can change the safety systems to behave as realistically as possible. Combined with Dovetail's assets, Train Simulator with Open NEC represents the ultimate Northeast Corridor driving experience, and it works with the routes you already own and the scenarios you have already downloaded.

Currently, the mod includes enhancements for each of these locomotives:

And provides full compatibility for each of these routes:

This website is divided into several sections. In the Get the mod chapter, you can find information on obtaining and installing the mod and when you can expect the next release. In the For players chapter, you can learn how to navigate the newly improved Northeast Corridor with your newly upgraded equipment. In the For contributors chapter, developers can find information on how to contribute to the project, as well as technical documentation on Dovetail's content.

At the project's GitHub page, you can file issues, view the roadmap, and browse the mod's source code.

Does this mod include any route or model improvements?

No. Currently, this project only includes improvements to the Lua scripting. Everything has been carefully constructed to avoid conflicting with other mods, especially Fan Railer's physics and sound mods.

Does this mod merge any routes together?

Help! I was driving in an external view and now my train is stuck in a penalty brake.

Open NEC enables all safety systems by default, which must be responded to, even when not driving inside the cab. On most locomotives, you can press Ctrl+D to disable ATC, and Ctrl+F to disable ACSES. Furthermore, Open NEC also adds an alerter subsystem that will sound an alarm if the controls are not manipulated within a certain period of time. There is no cab or keyboard control to disable the alerter, but you can press the exclamation mark on the HUD to "stick" the acknowledge button in the pressed position, which will prevent the alerter from activating.